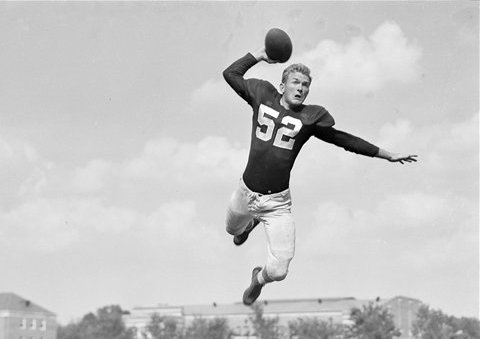 During World War II, Harry Gilmer headed up what was called "The War Babies," a group of players who, for the most part, couldn't serve in the military. He went on to have a prestigious career, and renowned sportswriter Grantland Rice called him, "the greatest college passer I’ve ever seen."

The Washington Redskins drafted Gilmer, the 1946 Rose Bowl MVP, with the first overall pick in 1948. 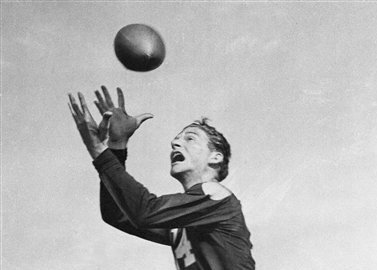 Approximately 50 years before Jerry Rice changed the way the wide receiver position was played, Don Hutson revolutionized it first at both the collegiate and professional levels.

With deceptive speed, Hutson was considered the pioneer of modern pass patterns. He was the first to perfect the technique of catching a pass "in traffic" and made the end-around a potent weapon.

"For every pass I caught in a game, I caught a thousand in practice," Hutson once said.

Hutson played 11 years in the NFL with Green Bay, 1935-45, was All-Pro nine times, led the league in pass receptions eight times and in scoring five times, and was twice named MVP (1941-42). He finished his pro career with 488 pass receptions, more than 200 more than the next-best player.

His 99 career touchdown receptions stood as an NFL record for more than four decades, and his mark of 29 points in a game has yet to be broken. 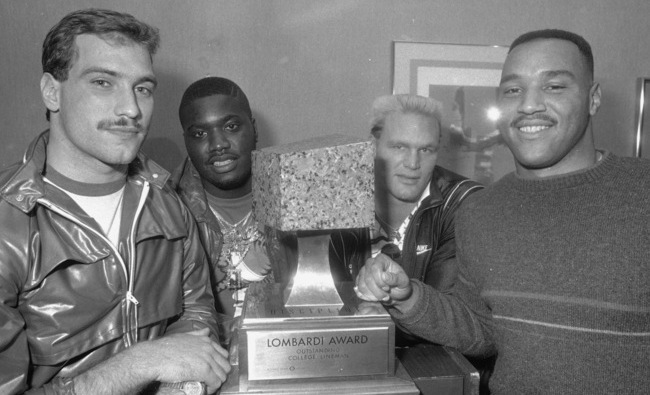 In 1986, Cornelius Bennett notched what's simply known by Alabama fans as "The Sack" against Notre Dame, which remains one of the most famous plays in Crimson Tide history.

Bennett was a three-time All-Southeastern Conference selection and two-time All-American, and he was named Defensive Player of the Game at both the 1985 Aloha Bowl and the 1986 Sun Bowl. His senior year, he compiled 61 tackles, 10 sacks and six forced fumbles en route to unanimous All-America honors, in addition to finishing seventh in Heisman Trophy voting and receiving the Lombardi Award given to the nation's top lineman.

He then went on to have an illustrious pro career playing in four consecutive Super Bowls with the Buffalo Bills (1990-93) and a fifth with the Atlanta Falcons (1998). 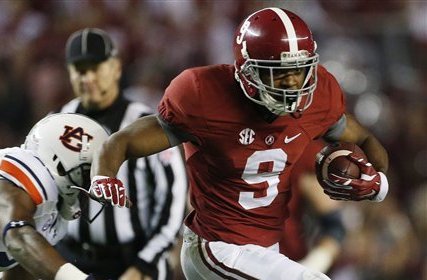 Nick Saban ran out of good things to say about Amari Cooper during his final season at Alabama (2014).

"Amari is not worthy of anyone comparing him to anybody else," the head coach said. "He is Amari Cooper. He has his own style. He's a very competitive guy who works really, really hard. Has really good speed getting in and out of breaks. Works hard in the game to get open. Does a good job of executing, has made a lot of really big plays for us this year.

"He's certainly been a dynamic player for our team and has made a great contribution to our season."

With 124 receptions for 1,727 yards and 16 touchdowns, Cooper set numerous single-season Crimson Tide records (many career marks as well) and put up most of his biggest numbers against some of the best pass defenses in college football. 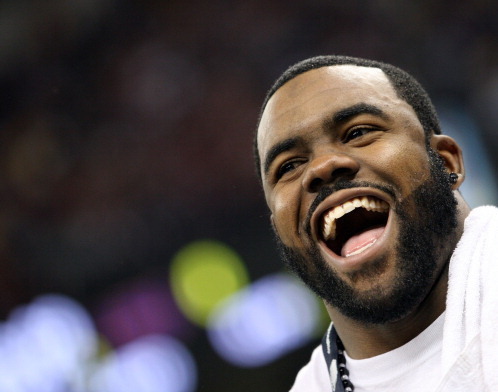 It was only 74 years in the making, but Mark Ingram Jr. won Alabama's first Heisman Trophy after helping the Crimson Tide finish the regular season undefeated en route to the national championship.

Ingram tallied 1,648 rushing yards to set the Alabama single-season record, and 1,992 all-purpose yards while scoring 20 touchdowns. He had nine 100-yard games, including a season-high and Bryant-Denny Stadium-record 246 yards against No. 22 South Carolina on October 17.

That game, when he handled the ball on every play during the Crimson Tide's game-clinching drive, and the screen pass against Florida proved to be his signature moments.

He also had only one career lost fumble and 1,002 yards after contact (53.7 percent). Moreover, he had 825 rushing yards and six touchdowns in Alabama's five games against Top 25 teams, averaging 165 yards per game against Virginia Tech, Mississippi, South Carolina, LSU and Florida.

In those same games, he averaged 201.1 all-purpose yards. 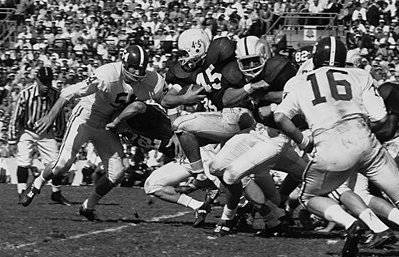 While there have been numerous Crimson Tide players who have placed high in voting for the Heisman Trophy, one of the most impressive was Lee Roy Jordan's fourth-place showing in 1962 as a center and linebacker.

He was one of the leaders of Paul "Bear" Bryant's first national championship in 1961, when opponents combined to score just 25 points. For his senior season, 1962, he was a unanimous All-American selection. Alabama went 10-1 with a 17-0 victory over Oklahoma in the Orange Bowl, where Jordan made 30 tackles.

"He was one of the finest football players the world has ever seen," Bryant once said of Jordan. "If runners stayed between the sidelines, he tackled them. He never had a bad day; he was 100 percent every day in practice and in the games."

Jordan became a key part of the Doomsday Defense with the Dallas Cowboys. He played 14 seasons in the NFL, became the franchise's all-time leader in solo tackles with 743, helped lead the Cowboys to three Super Bowls and was twice named All-Pro. 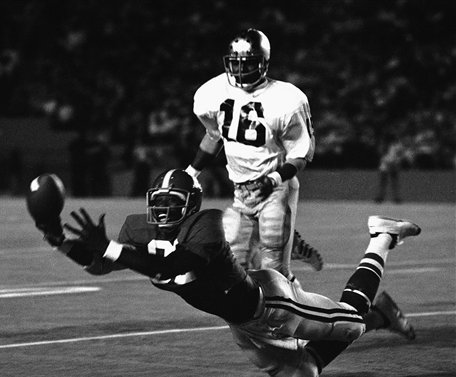 Although some consider Ozzie Newsome the best tight end in NFL history, he first was a wide receiver at Alabama.

In the NFL, "The Wizard of Oz" played in 198 consecutive games with the Cleveland Browns and caught a pass in 150 consecutive games, which was the second-longest streak when he retired as the league's all-time leading tight end in receiving with 662 receptions, 7,980 yards and 47 touchdowns.

Additionally, he won the NFL Players Association's Byron "Whizzer" White award for community service in 1990, four years after being presented the Ed Block Courage Award for continuing to play in spite of injuries.

Newsome is still in football as the general manager of the Baltimore Ravens. 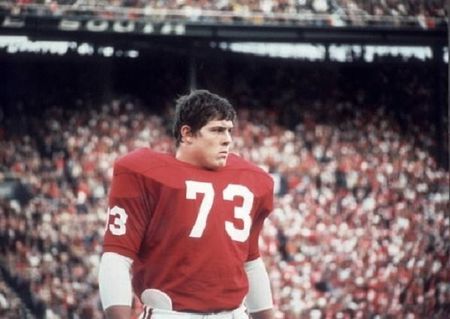 Once dubbed the "Best Offensive Lineman of All Time" by Sports Illustrated, John Hannah could easily top this list, especially if his pro career were a contributing factor.

Hannah was an All-American in 1971 and a unanimous selection the following year when he also won the SEC's Jacobs Award as its best blocker, along with Lineman of the Year by the Birmingham Quarterback Club, Atlanta Touchdown Club and Miami Touchdown Club.

After being the fourth overall pick in the 1973 draft, Hannah played his entire professional career with the New England Patriots. He was named All-Pro 10 times (1976-85) and selected for nine Pro Bowls. Other honors included being one of the few players named to an NFL All-Decade Team twice, for the 1970s and 1980s. He was also the top guard listed on the NFL 75th Anniversary All-Time Team in 1994.

Bryant once said of Hannah, "In over 30 years with the game, he's the finest offensive lineman I've ever been around." 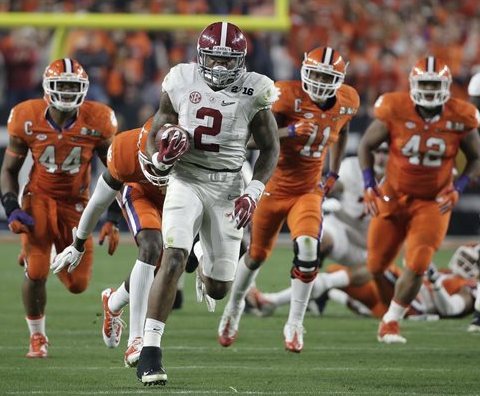 Derrick Henry's legendary stature will likely only grow with time because it's going to take a while for a lot of fans to grasp what he did in 2015.

In addition to taking home Alabama's second Heisman Trophy, Henry was the first to win all three major "player of the year" awards, the Maxwell and Walter Camp being the others. He also won the Doak Walker Award for best running back.

The Southeastern Conference's first 2,000-yard rusher, Henry topped Bo Jackson's numbers and broke some of Herschel Walker's longstanding single-season records, including his mark of 1,891 rushing yards on 385 carries set in 1981.

He had 10 100-yard performances in 2015 alone, to set another school record, and his 28 rushing touchdowns shattered the previous SEC record of 23 (Tim Tebow and Tre Mason).

The last time Henry failed to score a touchdown in a game was as a sophomore, against LSU in 2014. 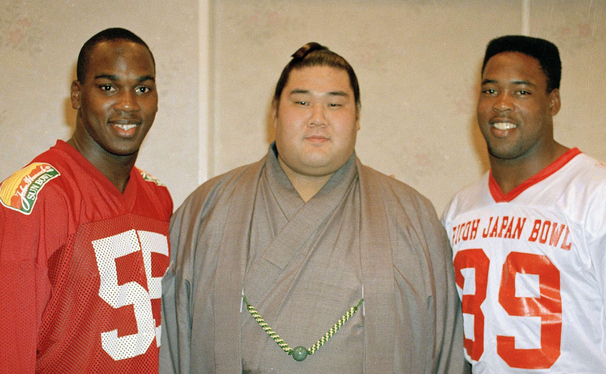 Sadly, he's not credited with either NCAA record because the NCAA did not start collecting official defensive statistics until 2000.

Alabama's first winner of the Butkus Award for best linebacker in the nation, Thomas was a unanimous All-American in 1988.

When the Kansas City Chiefs made him the fourth overall selection in the 1989 NFL draft, team president Carl Peterson called it a new "beginning" for the organization. Thomas recorded 10 sacks that initial season and was named the NFL Defensive Rookie of the Year.

For an encore, he had 20 sacks in 1990, the fifth-best season in NFL history, and set a league single-game record with seven sacks against the Seattle Seahawks.

Even though he died at the young age of 33 after a car accident, he was named an All-Pro three times and to nine Pro Bowls. He established franchise career records for sacks (126.5), safeties (three), fumble recoveries (18) and forced fumbles (45).

The 126.5 sacks were the fourth-highest total ever by a linebacker at the time of his death.